I know where to put the cat litter box in a small apartment because I’ve lived in one. Do you?

Well, I guess that’s why you’re here. You want to know just where to place that “treasure” box so you won’t lock yourself up with the awful smell. And that your guests won’t be bothered by the sight.

So, should you hide it underneath a table? Or let it rest in the comfort room? Is the balcony a good place for the litter box to stay — or your apartment is just too small that you don’t even have a little porch?

Sit back as I try my best to satisfy you with my experienced-based answers.

Let’s give that litter box its rightful place.

How many Litter Boxes do you need?

First up. How many litter boxes are you even going to have in your small apartment? If you’re used to living by yourself, I think you’ll have more than one cat. And here’s the general rule: one litter box for each cat, plus one extra.So for one cat, that’s two litter boxes. For two cats, that’s three. And so on.

But why? Well, you’ll have to set up an alternative box. You know how cats are, they need someplace else to pee if the first box is no longer that clean. Now I know what you’re thinking. You’re worried that your already small apartment might feel even smaller because of the additional litter boxes.

Here’s my solution: dismiss the extra boxes and clean up more regularly. For such a space as small as yours, you need to be more diligent about litter box maintenance. Scoop in the morning and scoop in the evening.

Sounds like a tall order? Then opt for a self-cleaning litter box. If you think you can’t maintain a litter box manually, then get yourself an automatic one. It can clean itself right after each time your cat is done with the dump.

Where to Put the Cat Litter Box in a Small Apartment?

So the next question (and in fact, the main question) is where. Where should you place that litter box?Here are a few criteria.

Of course. Let’s say you have a balcony and you want to put the litter box there. What if it’s already time to sleep? You have to lock the door towards that balcony, and unless you have a mini door for your kitty, he can’t possibly come and go for his night-time and pre-dawn calls to nature.

The same holds true if you’re putting the box inside the bathroom. What if someone’s using it and the door’s just locked? How will your kitty come in?

I know this is quite an obvious criterion, but accessibility can often be taken for granted if your place is too small and you tend to forget to think it through.

Respect your cat’s privacy concerns. A hidden cat litter box is a feline’s haven — it could be behind a curtain, a dome, or a simple cover.

As for me, I’ve tried placing the litter box in the bathroom. So far, it worked. I’ve positioned the box right next to the toilet. Other fur parents that I know have placed theirs between the toilet and the tub. Still, others have found just the perfect spot in the space under the sink.

But privacy isn’t limited to the bathroom. If you have an extra guest room (which, I know, is rare for small apartments), then you can place the litter box in there. If an extra room is not a luxury, then try to think of your entryway or hallway. You may have closets in there that you could dedicate to your cat’s private business.

As much as cats want their business to be kept private, they’d also want to conduct it as comfortably as they can.

That means your feline should not be disturbed by loud or sudden noises or by the stalking of ever nosy dogs while he’s doing his thing. To help your kitty out, be sure to place his litter box somewhere calm and quiet.

Think of low-traffic areas in your apartment. A sideboard or a side table can be repurposed such that it can store your kitty’s litter box along with his bags of extra litter. You can even craft a DIY litter box furniture just as the one described in the following video.

Just a heads up here. When looking for ideal litter box locations, you should avoid the space around your kitty’s food and water bowls. Not only is it disgusting to place food bowls and a pooping box side by side — it’ll also be disturbing for Tom to be peeing while Gigi is still eating just two steps away.

One of the worst problems you could have as someone who inhabits a small apartment and has a cat to live with is the lingering litter box odors. If you’re currently struggling with that, then you should place the litter box where there’s plenty of ventilation. Otherwise, it would feel too suffocating to stay indoors.

Probably the best spot I could recommend is near a window that’s almost always open.

Or, just put the box outside. I mean, this is exactly why I kept mentioning the balcony earlier. If you do have a balcony, it would be nice to have the litter box there. Just be careful about getting your neighbors disturbed.

If the balcony’s not an option, then again, have it by the window. But if you must keep the litter box inside the bathroom, then just be sure that the bathroom itself has a working exhaust fan.

There’s just one problem with bathrooms, though. They’re often humid. And humidity is the enemy of most biodegradable and organic cat litters. Take, for instance, the World’s Best Cat Litter. It’s corn-based, and when you place it in an oft-humid area, it can easily attract and grow mold.

If there’s no other spot where you can safely place the litter box, then get yourself a dehumidifier. Now if that will only make your apartment too crowded, then quit placing the box inside your humid bathroom and just pick a drier spot.

You’ll find some great suggestions below.

Now let’s see where you can actually place the litter box for small spaces. 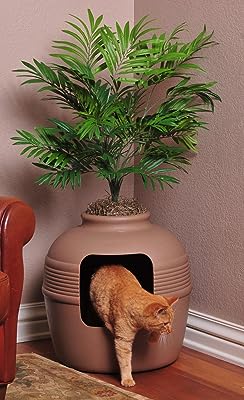 I know you already have several options in mind. The bathroom (you’re probably confused about this, still), the balcony, the guest room, the living room, or the kitchen, maybe. Well, wherever that is, you might need to at least hide the litter box inside another unassuming place. Yes, inside a litter box cabinet.

I’ve already mentioned this above, but I’d like to emphasize that sometimes, you can purposefully ‘make a room’ for the litter box when there’s just not a good option from any of your apartment’s spots.

So go for that DIY litter box furniture or grab for yourself (I mean your kitty) the Good Pet Stuff Company Hidden Litter Box. I’m telling you, it really looks pretty in a small apartment, as it looks like a real clay pot. When guests come over, they might not even suspect.

If you don’t want to hide it, then just make it pretty.

Really, it’s a simple principle I’ve learned while analyzing how I’d get by in a very small space. It turns out that if I can’t hide the litter box inside some furniture (simply because I have no floor space left for any extra piece of a clay pot or wooden cabinet), then I just have to switch to a litter box that won’t look hideous.

In short, I’ll pick a litter box that’s pretty enough my guests won’t even be bothered looking at it. 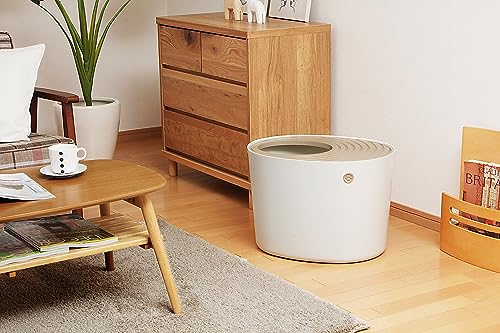 The nice-looking IRIS Top Entry Cat Litter Box just easily comes to mind. Top-entry boxes such as this small litter box won’t require a large mat as much as a side-entry box would. So, it’s not only pretty but space-saving as well.

Okay, here’s where your confusion lies. That’s fine. Based on my experience though, you can go ahead and place the litter box inside the bathroom. Just get a dehumidifier to resolve the issue with humidity.

Actually, there’s a lot to be grateful for if you place the litter box inside the comfort room.

So, the bathroom’s really fine. Just, in addition to the dehumidifier, choose a narrow and small litter box so you can save some space. I’ve tried using the Litter Genie Cat Litter Box when I was still staying in my mini apartment, and its flexibility simply allowed it to fit nicely inside my mini bathroom.

In an always-accessible utility closet

In case you want to keep your cat’s current litter box and don’t want to add another piece of furniture to your small space, then make use of a utility closet. No, not the one with your clothes, please (or any fabric, since they will stink and hold on to the undesirable smell). Just pick a closet for miscellaneous stuff and let the litter box have its way in there.

Also, make sure your cat can access that utility closet 24/7. You can make that happen by adding an interior cat door. The Purrfect Portal is one great example; install it and your feline would finally have no problems going in or out.

Placing the litter box inside an always-accessible utility closet is probably the easiest (and can be the cheapest) solution you can take. This way, you’re adding no other space-consuming piece in your small apartment. You’re just allocating a utility space that’s already there and then giving the ‘key’ for your cat to enter in anytime.

At this point, I think you’re already excited to take that litter box and bring it to where it’s supposed to be.

So, did I miss anything? Let me know if you have any more related queries.

The most important points on the question of where to keep the litter box inside a small apartment as for now, happy rearranging, repurposing, or redecorating!

Catthink.com is a website about cats and advice on how to take good care of them. We believe each pet can bring in much fun and joy to any home as long as they are adequately taken care of.