Looking for unbiased Okocat litter reviews? Our guidelines may give you just the guidance you need.

In this article, I’ll be introducing you to the history and mission of the Ökocat litter brand. I’ll also present how the various Ökocat litter formulas perform in terms of clumping, odor control, absorption, dust control, and tracking.

Read on so you’d see how the Ökocat cat litter products really fare against other cat litter brands and find out if they’re truly all-natural and safe.

Öko is a German word that means “eco” or “ecological.” Thus, the Ökocat brand presents itself as a producer of eco-friendly products.

The brand actually stems from a parent company called Healthy Pet, which, in turn, has already operated for over 25 years now. Healthy Pet belongs to the J. Rettenmaier & Söhne Group (JRS), which is among the world leaders in terms of processing natural fibers. Thus, Ökocat has been able to take advantage of its mother company’s expert knowledge in the field of natural processing.

Healthy Pet then launched “Cat’s Best” in Germany. For over 15 years now, it has served as Europe’s most reliable natural cat litter.

What kinds of litter does the brand offer?

Ökocat offers clumping litter products (which have been manufactured in Germany), as well as non-clumping wood litter and paper litter (which are made in the US).

Ökocat has a wood litter, which is made from 100% unused lumber or reclaimed timber. On the other hand, their paper litter is produced from the company’s own processing facility out of natural wood fibers. Thus, Ökocat sets itself apart from other paper litter manufacturers who reuse post-consumer paper products.

To be more specific, these are all the litter formulas produced by Ökocat:

The Ökocat litter products are relatively more expensive than other cat litter brands. This is most likely because the materials used are superior. For instance, instead of using recycled or post-consumer paper materials, Ökocat uses natural paper fibers sourced from wood and processed in their own facility.

To compare, the brand Fresh News produces its own paper litter but it’s so much cheaper since the papers used have been recycled from various paper products such as old newspapers.

Ökocat litter formulas use only natural fibers and human-grade ingredients that aid in the pellets’ pretty efficient (although not the hardest) clumping mechanism. So far, the Super Soft Clumping Litter formula provides the most sufficient clumping and superb absorption, among others.

Overall, though, there are many other natural litter brands out there that can provide a far more superior and rock-hard clumping. For instance, the World’s Best Natural Cat Litter (the original formula) shows a comparatively better clumping ability.

Any of the Ökocat litter formulas offer superior absorption — except for the pine litter. The brand’s secret to its litters’ power of absorption relies heavily on the naturally absorbent wood and paper fibers. These fibers exhibit a natural capillary action that draws in moisture upon contact, thereby absorbing your cat’s liquid waste efficiently.

Of the many cat litter formulas by Ökocat, the Natural Clumping Wood Litter provides the best and most incredible absorption performance. The other natural litter products of other brands, however, can still perform better than this formula. For instance, the Feline Pine Cat Litter can even be more reliable in terms of moisture absorption.

Because of the brand’s faithfulness to adhere to its mission, it doesn’t use any additional scent or other harsh chemicals to help in controlling odor. Instead, Ökocat relies on the power of the wood or paper fibers to provide odor neutralization. These natural fibers can kill bacteria upon contact, and thereby significantly reduce the odors they produce.

In particular, the Ökocat Natural Long Hair Breeds Cat Litter offers remarkable odor control the most among all the Ökocat formulas. Its denser pellets offer more fiber material to absorb and attack the awful ammonia and poop smells.

Though, it won’t be as effective as other brands that use activated carbon or baking soda to further attack odors as well as odor-causing bacteria.

Ökocat litter products are one of the best dust-free cat litter in our picks, although they’re not necessarily the best in terms of preventing tracking.

Both the Soft Wood Litter and the Natural Paper Litter are recommendable in terms of reducing dust. They add in other natural plant fibers that help with the binding of each litter pellet, thus minimizing dustiness. Meanwhile, the Long Hair Litter variant prevents tracking the most since it has denser pellets.

Comparing with other brands, Ökocat isn’t really the king in terms of preventing dust and tracking. While this brand is good enough, the Arm & Hammer Clump & Seal Litter, for instance, has been favored by many more cat owners because of its much-reduced tracking effects.

All the Ökocat clumping litters are easy to scoop, as long as you’re using the right kind of scooper. Pellets require the scoops that have larger and more cylindrical scoops, so you would want to take note of that if you’re buying Ökocat pellet litters.

Anyway, since ease of scooping is highly dependent on how a litter formula is able to form tight and solid clumps, it’s noteworthy to say that Ökocat litters can clump well, although, again, the World’s Best Cat Litter could perform better in this area. So, while Ökocat clumping litters wouldn’t give you a hard time with scooping, they’re not the most scoopable litters out there. 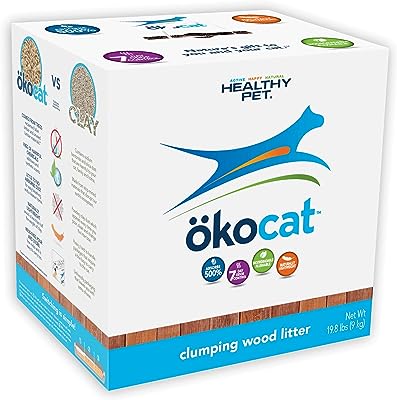 Made from Germany, the Ökocat Natural Wood Clumping Cat Litter is produced out of reclaimed wood. They’re actually sourced from fallen timber, or from lumber materials that have not been used or simply recycled.

Among the best things about this litter is its ability to control smells, giving you a 7-day odor-control guarantee. Its “Odor Shield Technology” makes use of the natural capillary system within each pellet. The wood pellets have the ability to absorb moisture up to 500% of their weight. Thus, the same system inhibits bacterial growth and traps odors effectively.

All of the above wood clumping litter variants contain no harmful chemicals or even additional scents. They’re also biodegradable, flushable, and clumps in a way that they’re very easy to clean. 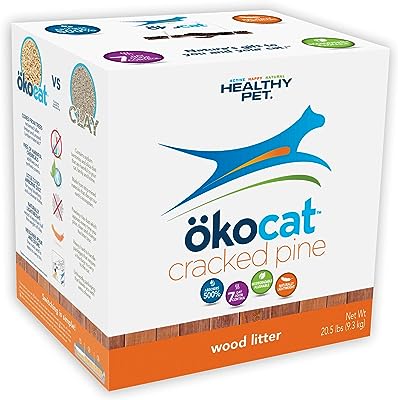 Made from naturally lightweight wood and plant particles, the Ökocat Natural Pine Cat Litter is not a typical watered-down version of litter. It also offers 7 days of odor control, having been tested in the labs and proven to absorb even up to 500% of its weight.

It’s safe enough for cats and the environment, as it doesn’t contain chemicals, dyes, and any other synthetic ingredients.

Moreover, it features a natural antimicrobial effect, thanks to the action of coniferous wood that kills 99.9% of bacteria and even fights against bacterial growth for several weeks.

This Ökocat formula is truly eco-friendly, as it’s both biodegradable and flushable. 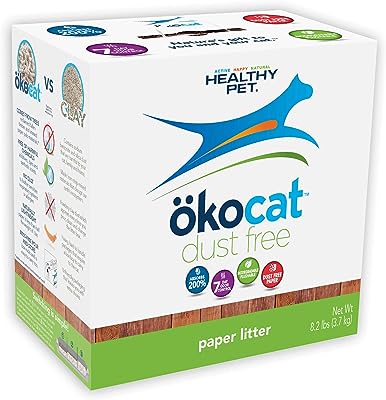 The Ökocat Natural Paper Cat Litter is among the top 5 paper cat litter products that we’ve mentioned before in our reviews. Unlike most paper litters, this one from Ökocat does not come from post-consumer newspapers. Instead, it’s made from clean, recycled pulp.

Natural fibers within the paper pellets can quickly and completely absorb your cat’s liquid waste. And while other paper litters still have a residue of inks or dyes, this Ökocat paper litter doesn’t.

With soft paper pellets, this litter won’t produce airborne dust. Thus, it’s also designed to be non-tracking. Because it’s just made of natural paper, the Ökocat paper litter is definitely biodegradable as well as flushable.

1. What scoop is best to use with the larger pellet litters?

The best litter scoops that match large pellet litters are those with big holes with cylindrical shape rather than circular. One example is the Iris SCP-CLXL Jumbo Cat Litter Scoop. With jumbo-sized holes, it can let the clean litter pellets pass through and fall back into the litter box so they can still be reused.

2. How often should you change Ökocat litter?

All the Ökocat litter variants are flushable. The company simply recommends that you don’t flush a big batch of litter all at once. If you do, the litter could clog your pipes. It’s advisable that you should flush only small amounts of litter at a time.

Yes, the Ökocat litter is safe, not only for your cat and for yourself, but also for the environment. For formulas that contain chemical additives, all ingredients in there are FDA-approved, which means they are human-grade. They are also similar to the chemicals in tissue paper, so there’s nothing to worry about when it comes to safety.

5. Does Ökocat litter work in litter robot or other clumping litter machines?

Ökocat recommends using either its Wood Clumping Litter formula (the one with cracked pellets) or its Super Soft Wood Clumping Litter, which features fine grounded granules much like what you can find in clay litter. So, both of these variants should be able to work with your litter robot or litter machine.

6. Why is there a PROP 65 Warning on the packaging of the Ökocat litters?

This PROP 65 Warning is a requirement imposed only by the state of California. While it does sound scary, it doesn’t need to be. This warning refers to “wood dust.” Wood dust is actually listed along with beach sand among over 900 substances that were ruled as harmful if you’re overexposed to it, either in your workplace or through any consumer products. According to the California law, any cat litter products that are based on wood or silica should explicitly state the Prop 65 warning, for the sake of compliance. Many litter brands, however, have not complied.

Actually, there are many substances in the California list that are harmless with typical use and would not risk your health or your pet’s. For instance, traditional cat litters made of clay are also required to place the warning on the label, especially with the silica or sand content.

7. Where to buy Ökocat Cat Litter?

The Ökocat cat litter products are available in stores either in the United States or Canada. You can also purchase them online via Amazon, Drs. Foster and Smith, Chewy, Only Natural Pet, Walmart, and Pet Flow.

So, we’ve conducted a little household experiment with our cats to see which cat litter brand performs better: the Ökocat or the World’s Best Cat Litter. We’ve also accounted for the experiences of other cat owners to make our comparison even more accurate.

All in all, it’s rather difficult to say which of the two brands is actually better. But, to give you a definite answer, if you account for long-lasting use and cost-efficiency, the Ökocat comes out as the winner of our test.

Overall, is Ökocat Litter worth it?

Well, the short answer is YES.

Our Ökocat litter reviews to show you that is this litter can be biodegradable, flushable, long-lasting, and cost-effective. They’re also pretty safe to use.

I could say that every Okocat litter formula, with a little exception of the Ökocat Natural Paper cat litter (it has a very hefty price tag compared to other variants), works excellently and is favored by many cat owners and cats alike, worldwide.

Catthink.com is a website about cats and advice on how to take good care of them. We believe each pet can bring in much fun and joy to any home as long as they are adequately taken care of.

Scroll back to top